Lefkada is the fourth largest Greek island in the Ionian Sea and the Ionian Islands. Is located south of Corfu and near Etoloakarnania area. It is connected with the land, by a 50m small bridge, free of charge. Main sources of its incoming are tourism, oil production, viticulture and fishing.
Humanity in Lefkada can be traced back to the Paleolithic area. The distinguished German archaeologist Wilhelm Dairepfeld, associate of Henry Schliemann in the Troy excavations, conducted extensive archaeological research in Nydri, and brought important findings from the copper age (2,000 B.C.) to light and hence started the theory that Lefkada can be identified with Homers Ithaca.
In the district of Lefkada belongs the small island of Meganissi, Sparti, Skorpios, Arkoudi, Kastos, Kalamos etc
In the old years the inland was called Agia Mavra (Santa Maura) from the church of Agia Mavra that was built by the Franks during the 13th century namesake epithalassio fortress.

Lefkada has unique beauty worldwide beaches, with clear crystal waters. The famous beach of Porto Katsiki has been characterized by international travel magazines as the most beautiful beach in the Mediterranean.

Access from neighboring islands
From Nidri and Vassiliki there are daily ferry-boats with direction to Meganissi, Kefalonia (Fiskardo), Ithaca (Frikes). Also boats are daily making trips to the surrounding islands and beaches.

How to get
Access to Lefkada for the visitor can be done easily and in a variety of ways.

It may come to the island:

By road
Lefkada is the only island which can be visited by car without using and paying ferry boat, by a 50m bridge that connects to Acarnania. Buses are making daily 5 routes from and to Athens (378 km) and 2 routes per week from and to Thessaloniki (420 km). The underwater tunnel of Preveza-Aktion makes easy the access to the island from northwest Greece as well as the port of Igoumenitsa. The bridge of the Rion-Antirrion facilitate enough the connection of the island with the rest of Greece, as well as the port of Patras (170 km), which is the second major gateway to Europe.

By air
There are flights to the international airport of Aktio, which is only 18 km from the town of Lefkada, while from Thessaloniki flying twice a week. Interim stations are Corfu, Kefalonia and the Zakynthos. There are also connecting flights twice a week with Crete (Sitia). From April until October, there are direct flights to Aktion and Europe.

could also be interest for you 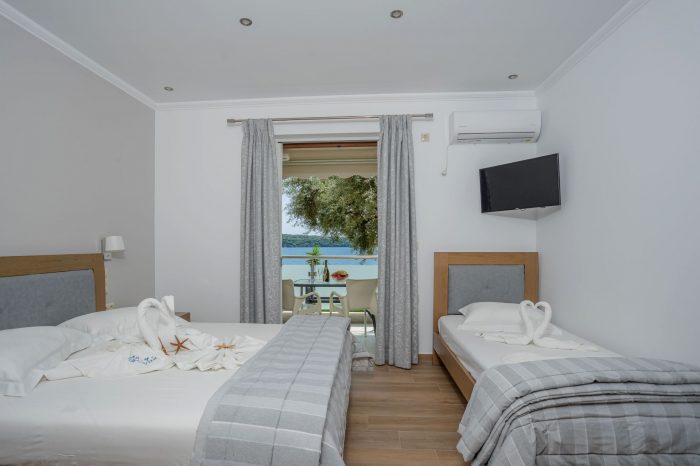 Mare Vita apartment can accommodate up to 4 people. You have an amazing view of the Ionian sea. All the apartments has AC, fully equipped kitchen television,...
From
$0 per night
View Detail 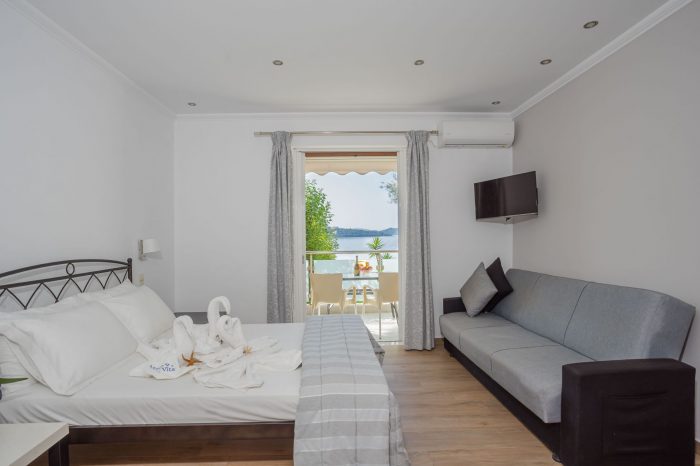 Mare Vita two bedroom apartment can accommodate up to 6 people. You have an amazing view of the Ionian sea. All the apartments has AC, fully equipped...
From
$0 per night
View Detail
© Copyright Mare Vita, Developed by Infinity Web